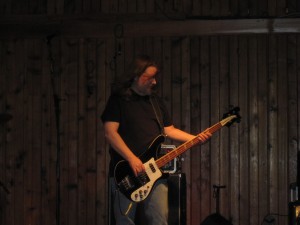 We lost our friend and band mate Kevin Neal Staedeli (AKA Blackie Carter) on April 9, 2012. He died of renal failure at age 43. Kevin left us far too soon. Our thoughts and prayers are with his family.

Kevin joined the band in 2010 based on a recommendation from Chris Roubieu. Chris and Kevin had played together in King Daddy’s Travelin’ Circus and Muleshoe. Steve La Follett of King Daddy called Kevin “the best guitar player I’ve ever played with.”  Kevin was also a prolific songwriter who contributed material to nearly every band he was in, as well as amassing several albums worth of material on his own.

Kevin played bass in the Sunday Best. He was kind, smart, and funny. You can check him out doing his thing at La Zona Rosa (Kevin is on the far right in this video). When he found the groove he smiled deeply.

This set at Saxon Pub was one of the last that we played together.

Please leave your comments and remembrances of Kevin below.

We miss you, brother. Rest in peace, Kevin.